I can hardly remember why I became interested in natural dyes but it was certainly around 1960 when my father (who always knew what I wanted before I even realized it) gave me a booklet by Margaret S. Furry Assistant Textile Chemist, and Bess M. Viemont, Assistant Textile Specialist,  Division of Textiles and Clothing, Bureau of Home Economics, [USDA, misc. pub. 230], December 1935.

This publication was prepared by the Department of Agriculture for distribution to communities whose handicrafts provided extra income for rural families. It was fascinating for me because in the 1960’s there weren’t any dyes for home studio use except Rit, Aljo and Tintex. These weren't very fast or beautiful. 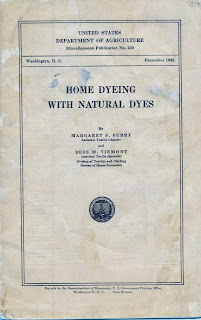 I actually learned to practice the use of natural dyes on wool when I was in the Peace Corps in Quinua, province of Huamanga, department of Ayacucho, Peru in 1963.  The village was located in the second cordillera of the Andes.  I was working on a program of Crafts Development.  I really loved the color quality and no matter how or what was combined they always looked well together.
The village ladies showed me how to dye with walnuts, dahlia flowers and cochineal on wool.  From that time I began a quest to learn about them. 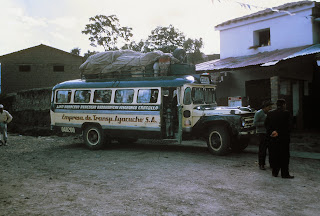 On the road to Ayacucho and Quinua 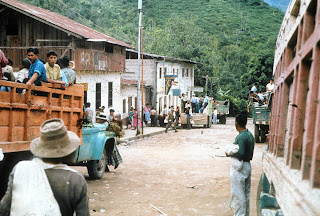 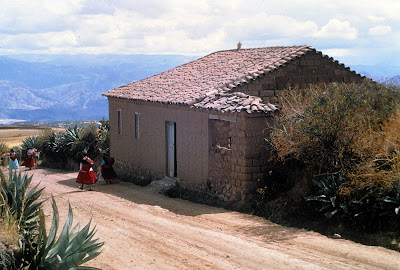 Our house in Quinua on the Ayacucho/Quinua/Tingo Maria highroad.
I know that most of the dye knowledge was empirical and was handed down from one person to another.  I believe that it is a world wide human resource subject to extinction as more and more people use chemical dyes. 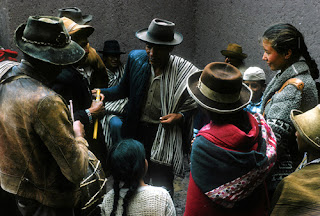 Me in Quinua during the festival of the Virgen de Cocharcas
It all seemed so mysterious and I do love a mystery. So more than 30 years ago I began serious research to study natural dyes that are directly applied or used with various resists; wax resist, paste resist, shibori,  and ikat.   It was very important for me to see first hand and document the various processes by the original artisans.  I needed to go to a country where natural dyes were still being used.  So in 1979 I went to India.