This katazome designed futon cover has a shishi (lion) design. It has been dyed to retain the white in the fabric as well two different blues.

This fabric is dyed with the katazome stencil technique. It is called aigaeshi, meaning the fabric is totally dyed in shades of indigo. 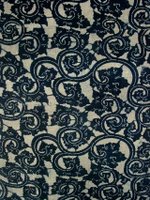 Indigo used with the textile techniques of tie-dye, paste resist and batik have been a common form of textile decoration in many cultures for centuries. It has always been combined with resist techniques. A resist technique is a method of dyeing fabric, which prevents the dye from reaching designated areas.
More so than any other dye, indigo retains it's hand dyed quality especially when combined with resist techniques. The flashes of color on the fabric can be compared with fire marks on a piece of pottery. The fabric retains the evidence of the dye process that brings the pattern to life.
Today many of these techniques combined with indigo are still being practiced in China, India, Japan, Africa and the United States. In most cultures indigo dyed fabrics were and still continue to be the cloth of the common people. From Yoruba aladire paste resist fabrics to Japanese tie-dyed kimono fabric to American blue jeans, indigo dyeing is still very much the wear of ordinary people.
In Japan, shibori from the verb shiboru to squeeze or wring describes the process by which fabric is tied, pleated, capped, clamped, gathered and knotted and sewn to resist the dye. Indigo is the favored dye for this textile technique. In Japan it is felt that on fabric, Ai (love) = Ai (indigo). When the fabric is finally untied, the hand of the dyer in the form of specific patterns as well as the dye pot is revealed.
Indigo dyeing using stenciled paste, as a resist requires a special paste that will not break down during repeated dips into the indigo vat. This textile technique was thought to have originated on the central Chinese mainland where craftsmen in Hunan and Guizhou still make a cotton textile with a white pattern upon a blue dyed ground. The resist used is made of soybean flour and lime and continues to be dyed in indigo.
A 12th century Chinese method called in-fa-pu is thought to have been the basis of the resist paste method widely used in Japan. In Japan this technique is called katazome. A mixture of sweet rice flower and rice bran is used as the paste. The paste is deposited on the fabric by the use of stencils.
Traditional Japanese stencils are made of layers of mulberry paper that have been soaked in persimmon juice then smoked over a fire. Delicate patterns are cut from the paper. The use of these paper stencils was conceived as a way of repeating patterns. These stenciled fabrics called karakusa, when dyed in indigo are commonly used for cotton and hemp futon covers, summer kimono, and door curtains.
In parts of West Africa the technique of using indigo as a dye with stenciled paste is still being practiced. In particular, the Yoruba people of the Niger area practice "adire eleko" dyeing using cassava starch paste. Thin sheets of zinc metal, linings of packing cases or old tin cans are flattened out and used as stencils
A similar method is found in Indonesia where a paste of peanuts, lime and water are applied through lacquered paper stencils.

Indigo is an ancient blue dye. It was the only way to obtain a true blue color on fabric before the invention of synthetic dyes in 1856. Of all the ancient dyes, indigo is the one that continues to give the greatest difficulty to modern dyers. Steeped in myth and tradition no dye available today continues to captivate and entice the contemporary craftsperson. In spite of the ease and availability of synthetic dyes and the unpredictability and ephemeral nature of indigo, it's blue enticing color still challenges and seduces the modern dyer. Indigo transforms fabric in a way unobtainable by synthetic dyes.
The physical evidence of the use of indigo is thought to be at least 5000 years old. Existing textiles have been found from Pre-Dynastic Egypt with colors that could only have been indigo. Some historians feel that because of the diffusion of the fundamental technology necessary for the use of indigo, and the spread of the dye throughout the world, dates the beginning of the use of this dye to about 25,000 BC. It is thought to be part of the knowledge of a migrant people. The complexity of the dyestuff also indicates an early technology of high specialization. In light of our modern understanding of chemistry, the processes do not seem complicated. For early dyers, however, the use of the various plants that we now know as indigo, must have come from extensive trial and error whose processes developed over thousands of years. Indigo dyeing involves strict traditions that were handed down from person to person,
Many plants contain indican, the chemical responsible for the blue color, but only about five species have come down to us through the centuries and have proved most useful. One of these species Plygonum tinctorum has been named as the National Treasure indigo crop of Japan.
Mention is first made of aozuri koromo (blue rubbed dyed robes) in the Kojiki (712 AD, The Record of Ancient Matters). The Kojiki relates the history of the Imperial line. A further mention of Yama-ai-zuri (rubbed mountain indigo) is made in the poetry anthology Man' yoshu (about 770 AD).