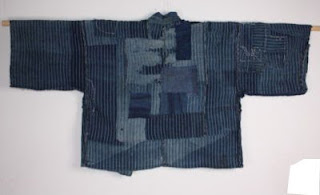 THE JAPANESE ART OF KUSAKIZOME

Because of climate, the growth of certain dye plants in India made available the raw ingredients necessary to print and paint bright colors on cotton. The availability of these dye plants, the time consuming processes to use these dyes on cloth and the dangers of travel before the 16th century made these dyes, fabrics and techniques relatively unknown in Europe prior to the 16th century.

In the West, the earliest recorded description of printed fabrics come from the Greek geographer Strabo (63 BC-20 AD). In the middle of the 17th century the Dutch and English, while trading in India, realized there would be a market for these printed textiles. They began to import them to Europe. By the end of the 17th century the popularity of these printed and painted fabrics, called chintz in the West, was well established.

In the East, during the Nara period (646-794 AD), the Japanese had became proficient in obtaining beautiful colors and patterns with simplified resist techniques using the same dyes. Much of their information on dyeing is thought to have come from India through China and Korea. The dyes and dyeing techniques brought by immigrants from Korea and China changed not only Japanese dress but introduced more colorful fabrics, as it did in the West 10 centuries later. The dyes affected the techniques used to pattern cloth and resulted in fabric that was typically Japanese.

Traditional Japanese resist dyeing techniques are the result of highly specialized craftsmen whose precision indicates that their skills were developed over a long period of time. The dye processes they used were time consuming, precise, tedious and labor intensive.

The Meiji restoration of 1867 brought reforms to Japan and contact with the West. Imported textile machines and synthetic dyes initiated changes and dye standards deteriorated. The dyeing techniques which do not lend themselves to mass production continue today mainly because of the Japanese appreciation of hand-crafted works. In Japan, the old dyes lacked a name to differentiate them from synthetic dyes. In 1958 Akira Yamazaki coined the term Kusaki-zome.

Kusaki-zome dyes may be applied to natural fabrics or yarn by immersion into a dye vat (batik or tie-dye) or by direct application (painting, printing or stenciling).

The kusaki-zome method of dyeing involves extracting the dyes from the dye material and making highly concentrated, stock solutions that can be stored in the refrigerator until needed.

The dyes can be purchased from dye companies, herb companies, the supermarket, grown in the garden or foraged in the fields. These dyes may be used on any natural fiber: cotton, linen, wool, silk, ramie, and viscose rayon. © M Joan Lintault