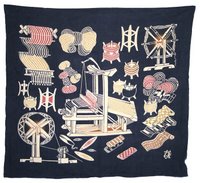 "Serizawa, Keisuke
(b Shizuoka, 13 May 1895; d Tokyo, 5 April 1984). Japanese textile designer. In 1916 he graduated from the design division of the Tokyo Technical College. Inspired by the bingata (multicoloured, stencil-dyed) textiles of Okinawa from 1928 he began to research them and, subsequently, the traditional textiles of other regions. His individualistic style of katazome (stencil dyeing) was the result of his involvement in the entire process, from design, stencil cutting and application to dyeing. He was deeply impressed by the writings on crafts by Muneyoshi Yanagi and contributed works to the MINGEI (‘folk art’) movement." Quote from "The Grove Dictionary of Art" 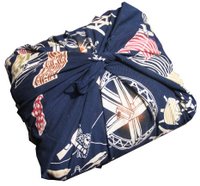